Every Year in September during the Childhood Cancer Summit and CureFest I remember five years ago, meeting Carson’s mother and Max’s grandfather.

written by Annette Leslie’s, then 17 year-old son, Carson. He was drawn to Carson’s book because he is also Vice Chairman of Max Cure, a foundation named after his grandson Max who is a cancer survivor. Richard liked the little  book wrapped in a plain brown cover so much that he bought thirty copies and passed them out to friends.   My daughter Beth Anne was a recipient of Richard’s generosity. She read it and when I joined in her fight against childhood cancer, she gave me the book to read. We both thought it was an excellent book and one that would benefit anyone dealing in childhood cancer. Ever since reading the book, I have always had the most difficult time writing the word, “cancer.” In his book, Carson said we should never, ever capitalize the word because it was not worthy and did not deserve the honor of being capitalized. He was 100% right.

That September back then, during the third annual Congressional Caucus on Childhood cancer (little “c” in respect of Carson), Beth Anne and I had lunch with Richard, and for the first time, I met Annette Leslie who joined us. She is a delightful lady with a nice Texas accent who, I believe, has never met a stranger in her life.  In the conversations during that sunny, warm fall day when we lunched at a sandwich bistro, Annette made Carson and his book literally come to life! The stories of him and his thoughts were so real and powerful. While Annette was talking, I looked at Richard and he looked at me. We were both trying to hide, from the two ladies at the table, the tears that were welling up in our eyes. Beth Anne and I were so moved,  we took our copy of the book and attached a sign-off sheet which told the reader that the book was being given to them because they may be someone who could help make significant changes in how childhood cancer is perceived and/or could possibly help in obtaining more research opportunities for better treatments and diagnostics. We added our  signatures and gave it to someone in Washington, DC who we both believed could make a difference and asked them to read the book, sign the sheet, and in turn, give it to another person they thought could aid in the fight against childhood cancer.

The next year at the fourth Congressional Caucus we met Annette again. This time she was a featured speaker at the 2013 Hyundai Hope on Wheels Gala which we attended in the evening after the caucus. Hyundai Motor Company was celebrating their fifteen years involvement and over $72,000,000 in grants and contributions to childhood cancer research they had made during that time.  Now, I believe the total exceeds $120,000,000 in grants and contributions. For this wonderful event, Hyundai brought together some of their top participating dealers,

researchers, oncologists, representatives of major medical institutions and the object of everyone’s attention, the children and their families that have been affected by cancer.

I asked Annette to allow Four Square Clobbers cancer to publish her speech and she graciously consented.

You children here tonight have fought valiantly.  Each one of you has a powerful story to tell.  Tell it often.

Tonight, Zafar (Hyundai Motors USA) has given me a few minutes on my soapbox because unfortunately, I too have a story to tell.  Thank you Zafar!

My boy Carson left a BIG mark on this world.  The kid had moxie, a bold charming confidence, an indomitable spirit, and a confidant swagger. In his book he said, “I love sports, babies & Mexican food,” and I know that he loved his brother more than anyone else on earth.

Carson was busy with high school, football and girls, when one morning, he told me he was feeling weird. Well, weird’s a little difficult to diagnose and for 3 weeks we went back and forth to doctors, pharmacies, and specialists, as symptoms worsened, no one could figure out what was wrong with my boy.

Then “that” morning, the morning that changed the calendar of our world, Carson said, “Mom, something is really weird, I think I’m seeing two of everything.”  After I could breath again, we jumped into my car and took off.  We didn’t slow down until we got to the emergency room!

I will never, ever forget starring at that doctor’s face and hearing words like, “brain tumor,” “cancer,”  “neurosurgeon,”  “oncologist,”  “chemotherapy,” “radiation.”  Knowing that my boy Carson was at the center of those words, we were scared. I wanted to crawl into his brain and take it on. He had baseballs to throw, fish to catch and girls to date, but the fight was his.

John Wayne nailed it when he said, “Courage is being scared to death but saddling up anyway.” So, we saddled up and we were carried by faith, family & friends. We embraced each bright spot they offered, and they offered many.

It was a gift to be Carson’s mom. Naturally, moms teach their kids about life, but when Carson was diagnosed with cancer, he began to teach us that courage comes from God and to embrace moments of goodness in the midst of pain.  In his book, he said, “The biggest blessing is life, every night I thank God for every day. Before cancer, I used to pray and thank God for my life, but now I mean it!”

As Carson’s journey pressed on and we searched the world for a cure that is yet to be discovered, the kid rocked that smooth bald head that undeniably shouted cancer, and during his valiant fight, he kept a journal of his fears, his dreams and his loss of dreams.

Being a dealmaker, he negotiated with his English teacher that his journal should count as his passing grade for the year and she agreed. That negotiated English assignment turned into a book with his teacher helping him dig deep and put his heart into words.

One night, in the hospital when neither of us were sleeping, Carson whispered, “Mom, make sure my book gets published.”  His book, “Carry Me“ is some of my boy’s secrets and a promise made good. His thoughts are raw and true and honest. We’ve sold thousands with proceeds going to research!

I brought some to give away tonight if anyone is interested.

Another night when neither one of were sleeping, he asked that the tumors that invaded his brain be studied with the hope of being part of helping to find a cure. Those tumors are being studied in Texas. Scientists right now, are finding bold new discoveries using his tumors.  Also, in Texas, there are millions of dollars slotted in a collaborative effort with CPRIT for research grants called the Carson Leslie Awards for pediatric brain cancers. Hopefully new and less toxic treatments will be discovered and that will be good, but a CURE is the goal because cancer in children is not meant to be an ongoing  business. I’m part of childhood cancer because I was forced into it. Hyundai is part of childhood cancer by choice. 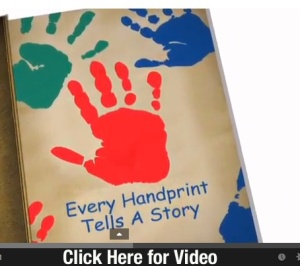 Someday I hope to run across that car wheeling around in America with my boy’s handprint on it!  When I see it, I’ll jump out of my car and give whomever is driving it a big ol’ Texas hug!

And, my next car is definitely going to be a Hyundai!  So, on behalf of Carson, thank you Hyundai for your amazing and generous commitment to childhood cancer research.

I loved that boy.

Annette Leslie heads up the Carson Leslie Foundation and can be reached at www.carsonlesliefoundation . Information regarding the purchase of Carson’s book may be obtained by clicking on the book at the top of the page.  Information regarding the Hyundai Hope on Wheels can be obtained by clicking on the white SUV pictured above.

5 Responses to Never Ever Capitalize “cancer”