We will remember our friend Jace as a wonderful, positive, fun loving, selfless guy who enjoyed life, loved his friends, his family and his God. To some, he may be remembered as an outstanding national advocate for DIPG research, or a pioneer in medical research for a cancer that kills more than 300 U.S. children every year. Jace, in his humble down to earth manner, would often  jokingly refer to himself as the DIPG crash test dummy.

Ask just about any of Jace Ward’s friends and they can tell you what Diffuse Intrinsic Pontine Glioma (DIPG) is, and just about everyone of them will tell you how they hate it with a passion.  Jace was diagnosed with it when he was 20 years old and a student at Kansas State.  About 350 U.S. children, mostly under 10 years of age, will get DIPG each year.  It’s a tumor in the brain stem (pons) and it is considered terminal on diagnosis. It’s not at all a newly discovered type of cancer. Nearly 60 years ago, Neal Armstrong’s daughter Muffie died from DIPG.  The experience devastated the family and left  them feeling absolutely helpless.  We put Neal Armstrong on the moon a few years later, and have

watched everything in our daily life – our cars, entertainment and homes – advance with new science and technology over the decades.  However, for DIPG, nothing has changed in the standard treatment.  DIPG is exactly the same.  Each child receives an outdated 6-week course of radiation and a hug for good luck with a 6-9 month life expectancy.  From what the doctor told him when diagnosed, Jace had 9 months to live. He went home and calculated it; he was “scheduled” to die on the day before he was to celebrate his 21st birthday. He was not about to let that happen! He and his mother began praying and got busy looking for the best treatments and if not one to cure it, then at least something that would prolong his life. They eventually found a revolutionary trial at Stanford in California.

“Share research now. Cures not credit. … Because DIPG won’t wait. It won’t wait to take my mobility, my voice, my sight or my life” … “While we sit around figuring out risks of sharing data, 300 kids are dying”.  Jace Ward, Address at NIH

The trial that is being conducted at Stanford today is the most promising therapy we have seen yet.  In fact, it’s not only promising, it’s exciting! The medical and research teams, using an Ommaya Catheter, are infusing CAR T-cells (Chimeric Antigen Receptor T Cells) directly into the brain stem tumor.  The T-cells target the GD protein that is found in the DIPG tumors and kill the tumor cells. Jace, diagnosed with DIPG two years ago, was the first to use the catheter and has had five infusions. With each infusion, he had improved functions.  Before one infusion, he entered the hospital in a wheelchair, afterwards, within days, he walked out of the hospital. Overall, his tumor volume decreased quite a bit, possibly as much as 60 to 70 percent with the 5 infusions he received.  Each infusion varies in effects, because as the T-cells kill tumor cells, the process causes varying degrees of inflammation that has to be controlled. It has been a learning process with each infusion. If the inflammatory response could be better controlled, perhaps more CAR T-cells could be delivered to wipe out the tumor in a few doses. Due to the inflammation with the infusion process, it is best to use 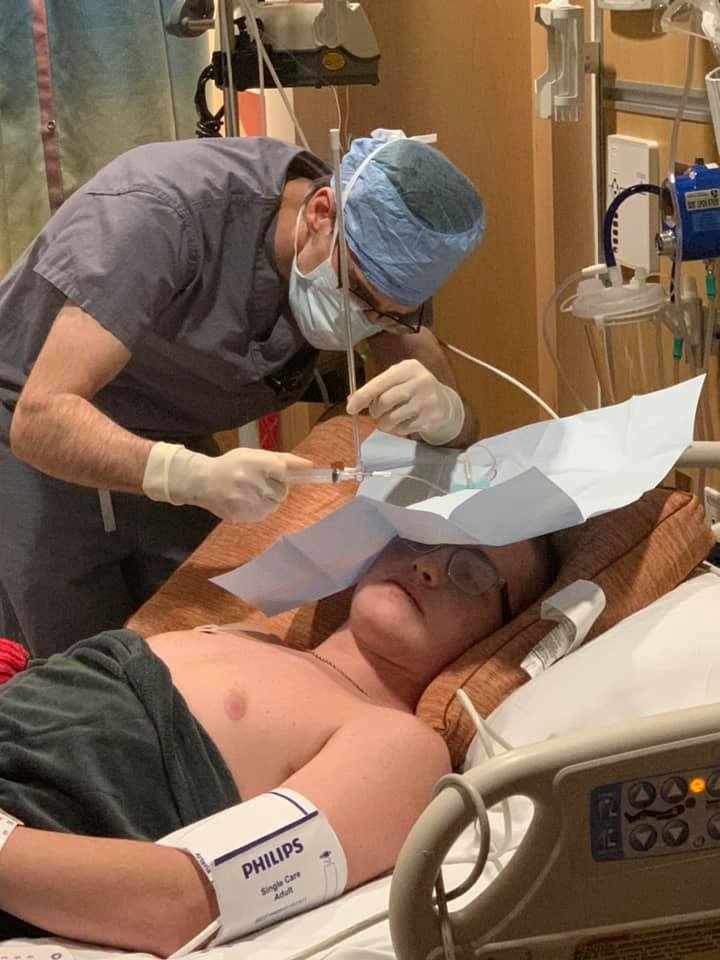 several infusions over periods of time.  Because of his age, and his acute knowledge of the disease, unlike the very young children that typically have this tumor,  Jace was able to communicate exactly what his body was going through each time he was infused.  Jace knew what his situation was and was acutely aware that the outcome for him would not necessarily work with these early trials. He gladly used his body and treatment experiences to gain as much detailed information as possible. He knew his medical data coupled with his ability to provide pinpoint information was invaluable to the medical and research teams in helping them refine the process for others who would follow him. Jace and many others familiar with DIPG believe delivering CAR T-cells directly to the tumor is the most promising method to find a possible cure for this terrible disease that is killing our children.

These early trials are extremely expensive and therefore can only accommodate a very limited number of children. Presently there are only 10 enrolled. In the future, as knowledge of the effects of the therapy is gained, people are trained, additional funding is obtained, it is planned for expansion to other institutions and many more children can be treated. 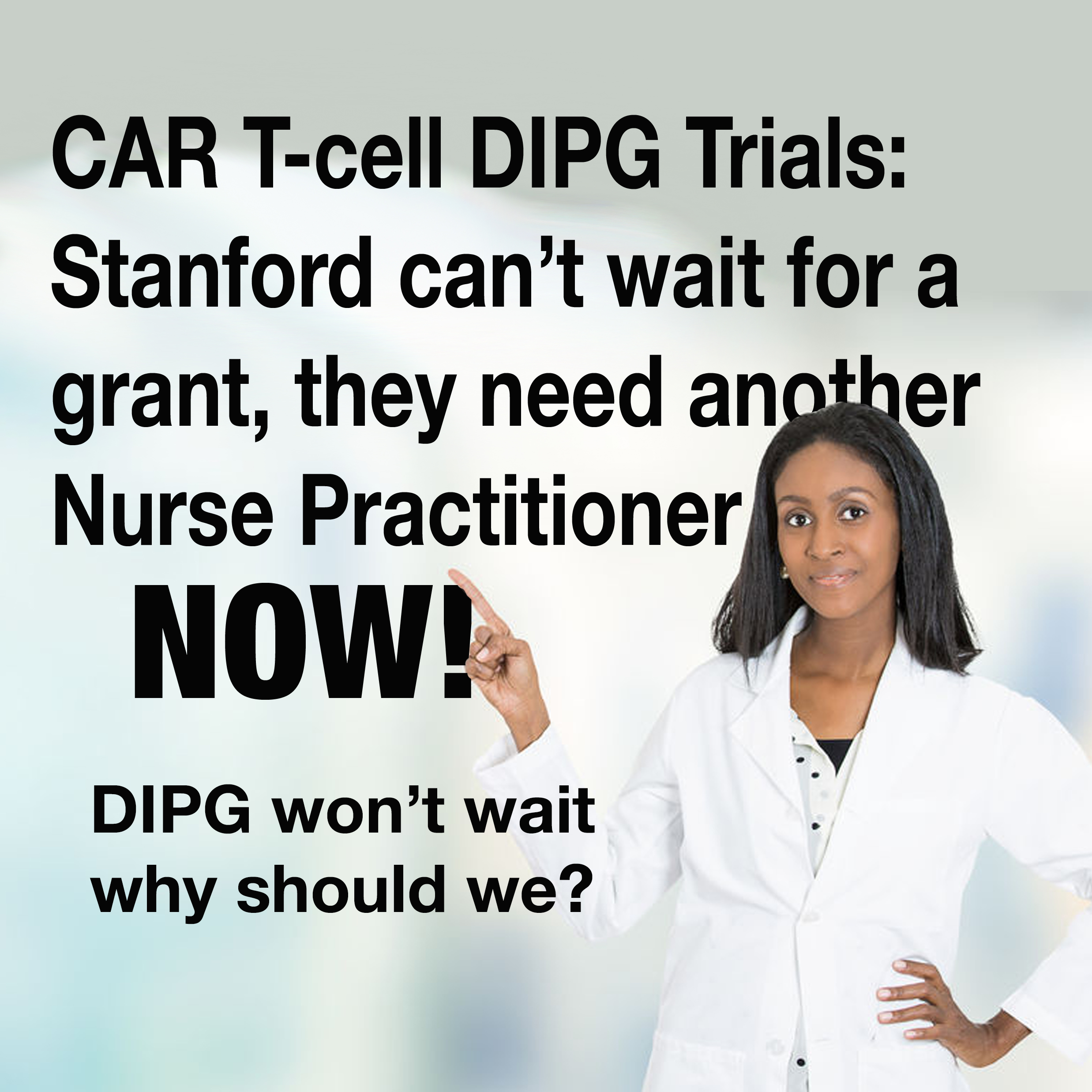 To expand the DIPG Car T Cell trial, Stanford needs a dedicated research Fellow, a Cell Pharmacist, and a research Nurse Practitioner. The Fellow and Cell Pharmacist have been funded and began work this month. The last step now is getting the Nurse Practitioner (NP) funded for two years. The Nurse Practitioner is responsible for gathering the correlative data from patients including blood draws, recording  symptoms, managing  medication for pain and inflammation. Each patient is different and all information is so important to gather. We need to be able to have more kids enrolled in trials as soon as possible to help the children live longer, and perhaps find a cure. We also need to learn from these children. Storm the Heavens, and Arms Wide Open, childhood cancer foundations are leading a group of foundations to fund the NP position. We need to fund the last $50,000 of the NP budget immediately.

DIPG will not wait and neither can we. Please consider helping obtain a Nurse Practitioner now, so this program can be expanded to others as soon as possible, not two years from now. Jace knew being one of the first in this trial meant it may not be the complete answer for him. Jace died on July 3, 2021 from a brain bleed. Since he was older than most children that get DIPG it may or may not have been related to his treatment. The risk of a tumoral hemorrhage increases the further a patient is from diagnosis.  In Jace’s case the brain bleed occurred at the spot with the most past microbleeds in the tumor. These were present prior to Jace starting Car T Cell, a reason Jace avoided avastin and even ibuprofen throughout his journey.  Since the hemorrhage did not occur at the height of inflammation following Car T Cell, Jace’s passing does not appear to be a result of the treatment. However, the Stanford Team will investigate and continue to learn from Jace’s tumor donation, including whether there is anything that could prevent an intratumoral hemorrhage in other patients. The CAR T-cell clinical trial gave Jace an extra 6-8 great months with his family.  He lived 25 months from diagnosis.

Jace believed 100% this treatment approach would be an answer for kids fighting DIPG. He  gave us and others our first real glimmer of HOPE.  His friends and family are commited to carry on Jace’s work. Jace had a shirt that read, “I can’t die, I’m busy,” which showed us how intense he was. With that same spirit, his friends will continue to be busy finding a way to save children from DIPG.

The funds collected by making a donation below will be collected by Arms Wide Open Childhood Cancer Foundation and will be directed for the purpose of  adding an additional nurse practitioner dedicated to support the DIPG/Spinal cord GD2 Car T Cell Trial at Stanford.