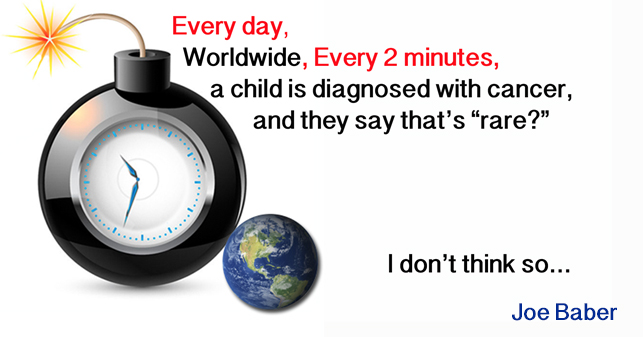 In our world, when something is considered to be rare, it usually denotes that it has value. Everyone would agree that the Hope Diamond and Leonardo De Vinci’s Mona Lisa, painted in the 16th century, is rare and very valuable. Examples of rare and more contemporary items range from a penny such as a 1944 Steel Wheat Penny, which is worth $110,334, or a 1963 Ferrari 250 GTO automobile that is valued at a whopping $70 million! When labeling childhood cancer as “rare,” contrary to the above, it actually devalues it and all the children it affects.

Today, most large medical institutions and organizations, even the National Cancer Institute use the word “rare” in describing childhood cancers. Yes, compared to such adult cancers as breast, lung, colon, and prostate cancer, kids’ cancers such as neuroblastoma, Ewing’s sarcoma, AT/RT, or DIPG are not seen nearly as often. Referring to the childhood cancer category, which is smaller, as “rare,” is not appropriate. Because it does not happen to the majority of the population, it’s just as inappropriate to label adult cancer “rare.”

Childhood cancer can’t be “rare” when it strikes more than 400,000 every year. How can it be considered “rare’ when, in the amount of time it takes to read this short post, somewhere a child has been diagnosed with cancer?

If we insist on labeling childhood cancer as “rare,” then we must acknowledge and label the funding we spend to find a cure even more “rare.”