Last night I went to a bereavement group. It’s for parents that have had a child die. I actually like to go to these meetings. There are no pretenses. We are all walking down the same path. We understand each other’s pain. When we ask, “how are you?” it has quite a different meaning and context than when someone who hasn’t had a child die asks the same question of us.

We had such a large crowd last night that we had to break into two different groups of moms and dads. Some with a spouse, others without. Some were young, first time parents whose child died as an infant. Some, like me, have more than one child. Others had a child(ren) after the death of their first. We had several elderly people (one gentleman was 90 and his daughter died years ago when she was 55).  Some kids died from disease while others were from car or motorcycle accidents. We have quite a few suicides in our group. We would have never met outside of this bereavement group. Our lives wouldn’t have crossed paths. But tragedy brought us together.

This group has made me more compassionate. I had read about the death of a teenager who jumped off the ninth floor of a parking garage a couple of months ago. Now, her mother and I are sitting next to one another. Her daughter is no longer some abstract story that I read about in the paper.  Now she is real. Her mom is a living (or trying to), breathing person that can’t fully grasp her circumstances. I feel her pain rolling off her. I understand her need, to avoid, acknowledge her new reality. She looks to me for solace. I’ve walked her path.

Some of the children have been gone for 15, 20 or more years. I look to those parents for solace and guidance. These are the people that give me the most comfort. I’ve had more people than I could count tell me to “give it time,” “it’ll get easier as time goes on,” “time heals all wounds”…  I could go on and on with all of the asinine cliques that have been said to me about feeling better the further away we get from Gabriella’s death. The simple truth is that it doesn’t get better. I think that “it gets easier” for the people that are saying those things to me because it’s not so fresh and raw for them. But, as I turn to the parents whose 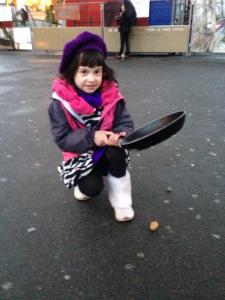 child has died a decade or more ago and as I hold their hand or pass them a tissue as they cry, I feel relief with their grief. Relieved, because my feelings are validated that my love for Gabriella won’t fade as we get further from her death.

All different but, the same. The same grief. The same despair. The same longing to hear our child’s voice and laughter, to hug and kiss them, to have another conversation. We miss our kids.