Childhood Cancer by the Numbers

Numbers are wonderful. Numbers are dangerous. Having spent most of my career in management, within the retail sector, I have been conditioned to pay attention to numbers. Numbers can paint a picture.  Numbers can be your navigator. They can show at a glance and without prejudice, success or failure.  Numbers don’t contain opinions or emotions, just facts. Numbers, like grapes or peaches or tomatoes, are good if fresh and gathered properly, packaged and presented with care.  On the other hand, if numbers are stale or gathered without care for accuracy or aren’t processed properly, the navigation

they provide will certainly take you in the wrong direction.

To me, the most surprising and irritating numerical unit of measure I have heard in the childhood cancer world happens when very educated people try to measure our successes in treating childhood cancer.  They say things like, “In the last three or four decades, we 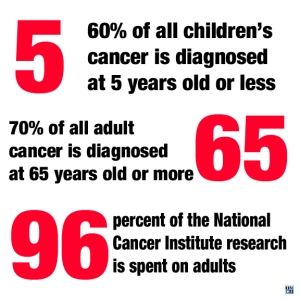 have made tremendous progress in …”  In the entire fifty years I spent in retail management, I know for a fact, no one ever used  “decade” as a unit of measure to gauge any type of progress.  To know where we were headed, our units of measure were: yesterday, week, month, quarter, half, year.  Never, “decade!”  When you measure the past in decades, you are implying that advancement will also take decades.  We don’t have the time to wait that long. Kids are dying!

The best report should be a collection of numbers in black and white, positive, negative, or whatever it is, but factual and clear to the reader so they can make their own conclusions.  A good report will be clear enough to have most people come to the same consensus. Having said that, I have to admit, when it comes to childhood cancer, for me there is one element that is always involved.  It’s emotion.  Pure parental emotion.  I can’t help it. I am guilty of mixing my strong parental emotions with everything that involves children.   Sometimes the emotions are much stronger than the numbers.

Last September, at the Hyundai Hope on Wheels banquet in Washington, DC., I was seated at a table with Dr. Jennifer Cullen, a board member of the American Childhood Cancer Organization and a cancer epidemiologist who works at the Department of Defense. We had a wonderful conversation.  I assumed she was like the other doctors at the dinner, there to show support and to be honored, until I found out that she had lost her daughter Alexandra to medulloblastoma at age five.  I will never forget the look in her eyes when she told me. Talk about getting emotional with numbers!  This is a mother who lost her daughter and an epidemiologist studying childhood cancer statistics. Can you imagine how that would be?

The American Cancer Society (ACS) (I know I have been a very harsh critic, but please bear with me) recently published a report, “Childhood Cancer Statistics 2014,” in “A Cancer Journal for Clinicians.”  I applaud their efforts to clarify the state of childhood cancer today and feel the report will be very helpful. Jennifer Cullen wrote the accompanying article that was introduced with the ACS report. Her commentary is entitled, “Because Statistics Don’t tell the Whole Story: A Call for Comprehensive Care for Children with Cancer.”  To me, she brings emotion to the numbers and to the fact filled tables.  Regardless of any of the numbers, she makes a strong case in her appeal to improve the care for children with cancer by utilizing better communication skills among the clinicians and utilizing palliative care. She will convince any reader to seek out palliative care for any child with cancer.  She speaks with experience and from the heart, just as she did when I first met her. I too am an advocate for palliative care for every

I am happy to report the measurement unit, “decade” was not used in the ACS report. Nowhere did I see the offensive statement, “In the last four decades…. Yada, yada, yada.” While I am struggling with comparing all their numbers with my perceptions of what they should be or have been in the past, the twenty-one page report is rather matter-of-fact. I will assume the numbers are correct. One reason numbers seem to vary from one organization to another is because they use different age classes among the organizations. We need to all use the same standardized age groups going forward so the information from one organization is comparable with another.  The part I like the most in the ACS report is that it breaks down the five year observed cure rate by specific cancers. That’s important to determine where we are making progress and where we need to place our priorities.

In the ACS report table 3. reflects the five year observed survival rates for the period 1975-1979. As low as these survival rates are, they reflect large improvements over previous years.  Survival rates were extremely low before 1975. Here are some examples that St. Jude’s reported in 1962 when they opened their hospital: AL Leukemia was only 4%, Non-Hodgens Lymphoma was only 7%, and both medulloblastoma and neuroblastoma were each only 10% while Ewing Sarcoma was a low 5%. DIPG was less than 1% then as it is today.

Newly reported survival rates for the period 2003-2009 show large improvements over the 1975-1979 period and at the same time, highlight area’s with slower improvement growth.

Reporting numbers in this manner provides better navigation for the future. It gives direction and points out areas of opportunity.  To really capitalize on this guidance, we need to continue this type of reporting. Our ability to strengthen our reporting process in the future will affect how and where we set our priorities in treating childhood cancer. We should all be looking forward to the next report in the future. Hopefully, we can have annual reporting so we can compare 2004-2010 with 2003-2009. By reporting in this manner, we are better able to see where we are going. It will be uncomfortable for those who like to use decades because it is easy to see progress but difficult to see current direction.

“Progress in childhood cancer has been dramatic for some sites (types of cancer), but we cannot let that blind us from the fact that progress has been disappointingly slow for other sites, and that cancer remains the second leading cause of death in children,” said Otis W. Brawley, M.D., American Cancer Society chief medical officer. “There is much work to be done to improve outcomes, to reduce side effects associated with cancer and its treatment, and, we hope, to understand more about the molecular events that lead to childhood cancer in order to come up with ways to prevent or detect it early.”

In their report, the American Cancer Society predicts 2014 will see children diagnosed with cancer increasing to 15,720 and deaths of children (aged birth to 19) dropping to 1,960. Numbers are important, no doubt about it, but the most important number to parents will always be the number one. Will cancer occur to one of mine?  Will cancer take the one I love?

In order to protect our most important number, we need to gather accurate and timely information, report it properly and pay close attention to all of the numbers and take action where indicated.

1 Response to Childhood Cancer by the Numbers