Shocker of a Vacation

Most people spend their summers doing things like taking vacation.  I, on the other hand, spent this summer getting involved in childhood cancer awareness and trying to figure out ways to spearhead a new fundraising effort.  As I discussed in my prior post, The Climb, my journey into the childhood cancer world took a major leap forward this past June–because I took my older daughter, who was then 5, to a small local charity run/walk to benefit St. Jude and was struck by the fact that there were no kids there on a beautiful morning to support kids with cancer.  I was really annoyed that healthy kids were not there running or walking on behalf of kids whose childhoods are being sidelined from cancer and chemotherapy.  Maybe I was just in a ripe mood that day, but I haven’t gotten over it one bit—so it looks to be permanent.  adfasdwrwerqeqrtqetq3tqtrwerttwrewreadfasdwrwerqwerqwerwefdsfasdf 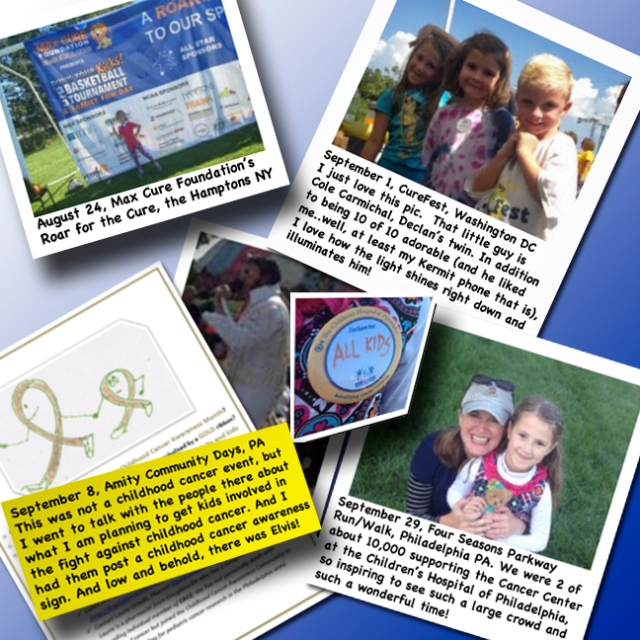 I will be talking a lot more about my planned event in future posts, but I want to focus the rest of this one on 10 very shocking things that I have learned from early June  to late September.  Here we go, in no particular order:

1. I was shocked to learn that September is National Childhood Cancer month and symbolized by the gold ribbon: I am very experienced and knowledgeable about cancer, both professionally and personally (through my family history, as highlighted in

my introductory post, What’s MMMT got to do with it?, and in Gold vs Pink), and have always had a very profound sense of compassion for children with cancer.  I opted to travel down to St. Jude during my clinical pharmacy clerkships. I drove solo from Pennsylvania to Tennessee. It was not a forced assignment, but my choice, and it was not driven by a desire to see Graceland (which was very underwhelming, by the way).  On top of all that, I am super protective of the health of my daughters and would do anything to protect them, so I was very upset with myself that I did not know this.  How on earth did I not know this?  Turns out, however, that I am not alone.  Sadly, at least in my world, it seems like practically nobody has any clue that September = Childhood cancer = Gold, and I can say that with confidence as I have been directly asking people about it over the last month. I get the same response—wow, no, I didn’t know that!

2. I was shocked to hear Fox Sports announcers talking about childhood cancer!  Out of nowhere, I heard it as I was watching the Philadelphia Eagles get their butts kicked on Sept 29th!:  If you haven’t heard, there is a new “Pro Football 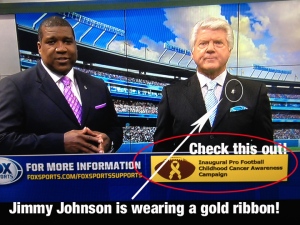 Childhood Cancer Awareness Campaign.”  I guess it is not an official NFL thing (at least not yet) as they used the odd word choice of “Pro Football,” but an excellent step in the right direction nonetheless.  Just by making the announcement, more people now know about the gold thing (Yay! See friends, I wasn’t making it up).  A little earlier in the month would have been nice, but we’ll still take the 29th!  See White House, it is never too late, as they say!

3. I was shocked to learn just how dreadful the state of pediatric-specific cancer funding is and the extent to which advances in treatment have been lagging:  I don’t agree with it, but I can understand why pharmaceutical/biotech

companies have not been investing in pediatric cancer research.  Again, I am not saying that it is right.  The pitiful funding from the federal government and places like the American Cancer Society is far harder for me to even grasp.  I truly did not appreciate how little of those budgets are being allotted to the kids.  Seriously, kids with cancer are and have been low man on the totem pole–how did this happen and what will it take to fix it? 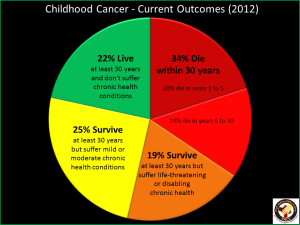 4. I was shocked to learn just how high the long-term complication rate is among childhood cancer survivors:  My expertise is cancer drugs, so I am well aware of their side effects and that they cause things like secondary cancers.  Having said that, I did not realize that it is more likely than not that survivors will suffer from long-term complications and disabilities.

5. I was shocked to learn about a horrible brain tumor called a DIPG and the critical need for viable treatment options for this entity:  I can honestly say that before this summer, I had never heard the term ‘diffuse intrinsic pontine glioma’ or its acronym DIPG.  As part of my fundraising interest, in researching existing childhood cancer organizations, I quickly learned about a number of children who have had their lives cut so short because of DIPGs.  I was shocked that I have never heard or read about DIPGs, considering that I am in the cancer literature practically every day and come across all sorts of things that I am not looking for.

6. I was shocked at how insular the childhood cancer community is:  I am just a human being trying to do my part to help children and have my kids do their part too, so please consider me a real member of this community and not an outsider.

7. I was shocked to hear about families and friends abandoning and fleeing from those who have lost a child or grandchild from cancer:  I have been hearing and reading about it over and over, how relationships have been completely lost as part of the aftermath of losing a child from cancer.  I am not the most forgiving person by nature, so I probably shouldn’t be offering advice here, but in the spirit of helping kids with cancer, I will put this out there:  I hope that some of you can find a way to give peace a chance with time.  Maybe not today or tomorrow, but at some point in the future there might be a relationship that will all of a sudden seem at least a little fixable.

8. I was shocked to hear that childhood cancer organizations would engage in competition against one another, and then come to my own conclusion that it appears to be true:   I did not want to believe that competition exists in this community, in ways that would be serving as a barrier to making strides toward the ultimate goal of finding cures, but I have seen enough to know that it is indeed happening.  This is actually a very thorny topic for me right now and I can feel my blood pressure rising as I type, so I am going to defer further comment to a later time.  This will likely be a topic of a separate blog post, full of spice and vinegar.  In the meantime–Maestro, can I get a little “Peace Train,“ please?

9. I was shocked to learn just how hard it is to get people in the childhood cancer community to pick up a phone to answer a call, return a voice-mail, or respond to an e-mail from someone simply looking to help:  I am not used to having phone calls and e-mails go unanswered, people don’t do that in my paying job.  Quite frankly, if I didn’t know better, I may think that the state of childhood cancer treatment and research funding must be peachy and there is no need for any additional help.  This can give a very bad and a totally wrong impression, I’m glad that I know better.  I keep reminding myself that the kids who are battling cancer would not turn me away, so I remain here for them.

10. I was shocked at the degree to which the mere mention of the words “childhood cancer” evokes a “deer in the headlights” response among people: In talking with my friends and family about childhood cancer and why it is important for people without a personal experience to get involved, I keep it to this, “Childhood cancer research is majorly underfunded, kids are being left behind when it comes to new treatments, and most of the effort to raise awareness and funds is led by parents who have lost their own children and they should not be forced to shoulder that burden. So, I have decided to get involved with my kids and am looking for others to join us.”  I guess I am naïve, but I thought that this would evoke a sense of some serious outrage and thus a major, immediate call to action.  Instead, the response from most (but not all) people is very flat.  Even with my best Rah-Rah Cheerleader impersonation about how we can make a difference and genuine optimism that there is hope for the future, I generally cannot get any enthusiasm back from people.  I think I lose many at them at the words “childhood cancer.”  It basically freaks them out! It turns off their brain to protect it from any further damage, and morphs them into really sad puppies.  I could go on and on about why I think people shy away and why I think they are making a big mistake, but I am already over the recommended word limit, so I think it is time for me to wrap up for now and wish you well until next time.

3 Responses to Shocker of a Vacation