UPDATE: Editor’s Note: on May 27, 2022, Rachel gave a speech at her Highlands High School graduation.  If you are not aware of Rachel’s story, read along. If you know her story, scroll to the bottom and read her speach.  We should note,  Rachel’s not aware, but for so many of us in the childhood cancer community,  her story has given us three major gifts:  Inspiration, Hope and a new way to spell “Impossible.”

Today, “Rachel’s Place” is with her family somewhere between Hope and Peace. She actually lives near Bel Air, Maryland, but her real place of comfort and security is anywhere she and her family are together. Each year during Brain Cancer Awareness Month,  time seems to stand still for her parents as  they prepare for the annual MRI to check and see if Rachel is still cancer free. On May 14, 2013 they got the word that her scan results were clear again.  This was the sixth year in a row! 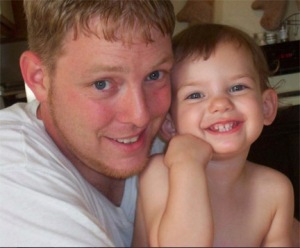 It seems like a century ago when Rachel was two years old and cancer free. Back then, those were happy days. Michael and Brandy Riskin had no idea of what Medulloblastoma was.  Now, they know  much too well what it is and what it can do.

Video: In the beginning

Even though it represents about 14 percent of the childhood brain tumors, Medullo-blastoma is not very well known.  Sometimes it is  referred  to as “PNET” (infratentorial primitive neuroectodermal tumor), it is a malignant brain tumor located in the Cerebellum region of the brain. It only strikes two in a million people and it is ten times more likely to affect a child than an adult.  Forty percent of these rare cancers are diagnosed before the child reaches five years old.  Since it is uncommon, the symptoms  are often associated with other ordinary childhood illnesses.  Delay in obtaining a proper diagnosis can have devastating effects.

The symptoms for this cancer often begin to appear for one to five months before the diagnosis is made. The child typically becomes listless, with repeated episodes of  headaches, which may lead to misdiagnosis of gastro-intestinal disease or migraine. The child may even walk with an unusual gate. Later on, positional dizziness, vomiting, and involuntary movement of the eyes are also frequent.  In some cases of late diagnosis, where the tumor isn’t discovered until it’s already causing damage to the   brain,  facial sensory loss or motor weakness may be present.

During the summer of 2006, Rachel was having some problems. She would often fall for no reason, and she threw up several times. During Rachel’s first few doctor’s visits, they looked at all the other causes for the early symptoms. The severity of her symptoms increased quickly, due to the large size of the tumor and excessive fluid buildup in her brain. On September 18, 2006, with a severe headache and vomiting, Rachel was taken to the emergency room and the tumor was discovered. Due to the dangerous increasing pressure on her brain, Dr. Ben Carson, at Johns Hopkins, performed brain surgery on her the very next day. It was only one month after the young girl’s 3rd birthday.

Dr. Kenneth Cohen and Dr. Rachel Rau were in charge of her treatment plan.  In an article published by Saint Jude’s Research, Dr. Cohen happened to

read about a new method of treating medulloblastoma just a few weeks before meeting Rachel for the first time.  The article suggested that using 5 cycles of a very high dose chemo and changing the timing of radiation treatments worked better than the old protocol for some highly aggressive cancers in young children.  It was a life saver for Rachel that Dr. Cohen happened to read this particular article when he did. Rachel’s tumor was so aggressive it is very likely that if the normal treatment had occurred, she would have a very low chance for survival. After the surgery, she also needed chemotherapy, radiation and a bone marrow transplant (BMT). That’s a lot for a three year old! During the third and forth cycle of her chemotherapy, Rachel’s mom was pregnant and because the powerful chemo could be absorbed through the skin and would cause harm to the fetus, she could hardly touch and hug her little girl. At one point Rachel lost her ability to speak, and after several difficult months, on Christmas Eve, all of a sudden, she started speaking again. Now that’s a Christmas present!

Mike and Brandy’s hero, besides Rachel, in this whole ordeal is Dr. Ben Carson of Johns Hopkins who, ever so delicately,  removed the tumor from her brain. Dr. Carson has been known for years as a brilliant neurosurgeon. The number of lives that he has saved, and the amount of respect and awe that he has earned in the world is undeniable. Lately, he has also become known as an outspoken political figure, and an advocate for reducing the amount of waste in the healthcare industry. Because of national news coverage, he is viewed by many as a very articulate gentleman who candidly addressed many of his political views and concerns at the National Prayer Breakfast attended by President Obama.  Since then, a movement has started to try to get Dr. Ben Carson to run for President in 2016. Regardless of what Dr. Carson does, he will always be the Riskin’s number one hero.  After all, you never know what the future will bring. Someday, Rachel may be in a very small, elite group of citizens who will be able to testify  that the President of the United States really got inside her head, and changed her life! 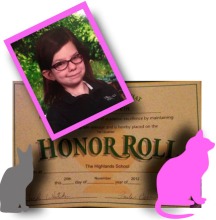 Through it all, countless days in the hospital, unable to work, chemo, bone marrow transplant, radiation therapy, surgery, nearly a million dollar hospital bill, pregnancy, the birth of Dylan, emotional, financial stresses,  and you name it, the Riskin family stayed strong because of the support of friends and relatives. Nothing, absolutely nothing is more important to a family in a situation like this than the

support of family and friends.  They were the window of normality and the glue of togetherness that helped them cope and meet each new day with hope for a better tomorrow.

Video: Rachel gets honored at school!

Today, at nine years old, Rachel is a healthy third grader on her way to fourth.  She enjoys playing with her best friends, Vicky and Cassidy and her brother Dylan. She also enjoys spending time with her cats, Lucy and Linus. She really enjoys creating her artwork and especially taking care of babies of friends and relatives. 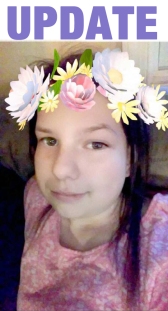 May 19, 2016: In just 4 months, Rachel will be 13 years old and more than 9 years cancer-free. Her parents write, “We continue to enjoy the kind hearted, empathetic nature that she shows to everyone around her every day. Rachel is now in the 6th grade and continues to thrive, despite the overwhelming odds she faced as a toddler in 2006.

May 27, 2022: Rachel and her family celebrate her high school graduation from The Highlands School. We are so very proud of her and her accomplishments!

Rachel’s Speech:
Good evening, my name is Rachel Ellen Riskin. I am eighteen years old and a Senior in the Highlands School graduating class of 2022. When I first attended The Highlands School back in 2011, I was very timid and anxious, and truthfully, I did not have many friends, nor did I know anybody who went here. My life has changed completely for the better over the ten school years that I have been here, and I would not have it any other way.

I have made a lot of true and loyal friends over the years. During my time of being at this wonderful school, with the assistance of my teachers along the way, I have learned so very much from them. I am thankful for every teacher that I have had. I have been through a lot this year, but I managed to keep my head held high and work my way through the school year without giving up. Someone very special to me had once told me “Never give up and try harder” that very special person was my teacher, Mr. Matt Backert.
My one true goal for after I graduate high school is to become a Childcare worker. I love working with children. I have always wanted to work in the Childcare field. I look forward to working with children of all ages.

It has been a wonderful couple of years here at The Highlands School, and man am I going to miss it. I have had many ups and downs and struggles here, and if I could take them all back, well, I wouldn’t, because I also learned a lot from the struggles, and still had some pretty amazing times at this school. I have made friends. I have participated in fun, social events like casual school dances and homecoming dances, Grandparents Day and book fairs. I am sad that Covid-19 kept us from having a dance this year, but I hope the kids next year will be able to have one! Let’s hope Covid goes away for good! (pause)
I would like to take a minute and thank all my upper and lower school teachers that helped me advance throughout the years, Mr. Eric, Mr. Karl, Mr. Brian, and Mr. Fred. As well as my Speech teacher, Ms. Susan. Some of my small group teachers that I have had in the past, Ms. Suzanne Fantom, Ms. Tiffany Lurz, Ms. Sara Watson (who is no longer here at the school), Ms. Heather Minor, Mr. Matt Backert, Ms. Kathy Springer, Ms. Sue Lebuhn,and Ms. Sharon Scranton. These teachers were with me every step of the way, from when I first stepped foot into this school. I am very thankful for every one of them.

I am very appreciative of the fact that I had the opportunity to attend this amazing school. I’d also like to thank my parents, Brandy and Michael for their love, support, assistance, and for always believing in me. Lastly, I would like to thank my grandparents Mom-mom, Pop-pop and Nana for everything that you have done to love and support me. I couldn’t have made it this far without all of you guys.

Fifteen years ago, I was fighting stage four cancer. Today I’m on a high school graduation stage. Don’t EVER let anyone tell you that something is impossible. Thank you very much.

Because of Rachel, we now spell it like this:

Tissue Donation – The last thing any parent wants to give  Information on the need for brain tissue in order to uncover the mysteries of childhood brain cancer.

Pregnant? If you are pregnant, consider harvesting cord blood for future use in your child.