Five-year relative survival rates describe the percentage of patients with cancer that are alive five years after their disease is diagnosed. Use of 5-year survival statistics is more useful in aggressive cancers that have a shorter life expectancy following diagnosis (such as lung or pancreatic cancer) and less useful in cases with a long life expectancy such as prostate cancer.

When a patient achieves that magical 5 year survival mark, everyone celebrates the milestone and they are considered by most people to be “cured.” That is not necessarily accurate. What it means is exactly what it implies: They have survived five years since being diagnosed, nothing more. The average age at diagnosis of cancer is 6 for children and 66 for adults. While the chart at the right shows great progress in five year survival rates in childhood cancer from one period to another, it is only comparing five year survival rates, nothing more. While it gives some comfort that we appear to be making good progress, it does not really measure survival beyond a five year period. Using a standard five year survival rate for cancer will take an adult diagnosed with cancer up to age 71, but it only takes a child up to age 11. Has the child really “survived” and beaten cancer? Sadly, the answer for a large number of children is, “No.” We need a more accurate “survival” measurement for children.

Kids cancer is not the same as adult cancer and survival for children must last much, much longer than just five years.  As we do today, using a five year survival rate for childhood cancer grossly discounts the pitfalls that lay ahead for up to 95% of the survivors. When it is communicated in such a way that  others outside of the childhood cancer

community can fully understand the long term impact cancer has on children, only then will we finally make childhood cancer a real priority. Let’s stop hiding from the reality of childhood cancer by using  unrealistic five year “survival” rates.  True progress in surviving childhood cancer can not be measured by only looking at the five year period from diagnoses. Today, advocates and medical professionals frequently cite 84% as being  the average survival rate for children.  In reality, the 30 year survival rate is only 65% overall.  A long term survival rate such as this gives a much different and more realistic perspective to the general public who we rely on to help fund research. We’d love to see the American Cancer Society or even the National Cancer Institute to step up and address the need for looking at a more realistic method of measuring survival for children.

There are several pieces of good legislation in play now that would benefit childhood cancers by improving research opportunities and increasing drug development.

The following article was written by CJ Colton in February 2013. It highlights what a child goes through just to get to the five year “survival” point. Studies have proven that survivors of childhood cancer actually are fighting effects of their “life-saving” treatments for the remainder of their lives:

Five Years Is Not Enough

This article is about how children with cancer are surviving longer. However it also points out the lack of research and funding for pediatric cancer. What the article does not say is that a major number of the children do not live to be adults.

I am not angry and I am not bitter. I refuse to become that way. Through our Faith we stay strong. However, our children are dying. How can you tell a parent of a 1 year old your child may live for another 5 years and that is considered good, or a mother of a 6 year old your child has 5 years. Both these children would die at a young age. These children would also go through horrible medical treatment to keep them alive. Five years is NOT ENOUGH for our children!

I know this because my son, Tony, was diagnosed with Clear Cell Sarcoma of the kidney at age 11 in July 2011. He finished treatment in February 2012. He lost his hair, had multiple surgeries, had a kidney removed, and was given medication that caused him to be so sick he lost 25 pounds. He was given radiation treatments, he hurt all the time. It hurt to walk or play and he never felt like eating because he was nauseous all the time. He was so sick. He smiled though most days. Most of the children do smile most of the time.

For one year after treatment he still had to go to the clinic numerous times and have radio- active or nuclear meds put in his body along with numerous scans, MRIs, and CTs. He made it one year with no sign of cancer. On February 8th 2013 we were told that Tony had a mass where his kidney use to be. On February 12 he had a biopsy of the mass. His liver bled during this biopsy and he was put in the hospital. On February 13 we were told Tony’s cancer had returned. We were referred to the National Institute of Health for a Phase 1 treatment called Ipilimumab. This treatment will make his T-cells over work to try and attack cancer cells. The effects of this medication are bad autoimmune side effects. This, we hope is his cure. This medication has been used on adults, but not many children. He will be the 8th child to receive this medication at NIH and the first child with Clear Cell Sarcoma to receive it. He may have to have a chemo that is called ICE next.

He will have treatment every 21 days at NIH which means we have to fly to Bethesda, Maryland for treatment. In between treatment he goes to All Children’s hospital in St Petersburg, FL several times during the week. His only complaint since re-diagnosed is he wants to have his port back. You see he has had over 20 blood draws and/or IV’s since February 8th.

Last Friday, March 8th 2013, while we were at clinic for a blood draw and a physical check to see about side effects I listened to what was going on there. I have listened in the past, but this day I realized something, it sounded like we were hearing a torture chamber of children and babies. I heard babies screaming, I heard toddlers yelling and saying “help me”, I heard school age children screaming and yelling “please don’t hurt me.” I heard a child yell “Mommy let me go, help!” I saw children trying to run away and I saw children sobbing. These children were getting port accessed, blood draws, large needles stuck in both their legs at the same time for chemo, and finger pricks to check counts. These are just a few of things these children and babies go through that have cancer. These brave and strong children have to go through this over and over and they just might survive past 5 years, or they might not. If they do survive they will have long term side effects from this treatment.

I will say again I am not angry or bitter. I hurt though, a hurt I could never imagine feeling to my soul. This hurt is out of fear for the life of my son, but also for many other children we have met going through treatment. The pain and suffering these children go through is tremendous and you witness it over and over.

As a nation we need to make sure our children receive the best possible research and treatment for pediatric cancer. It is our responsibility. Cancer is the number one disease that kills our children. We need to save our children for longer than 5 years.
I am just one mother with one child. 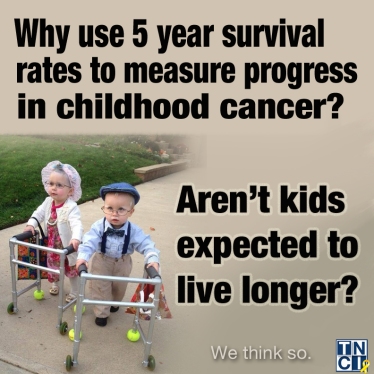 There are hundreds of foundations out there trying to bring awareness to childhood cancer and raise research money. We all need to unite as one strong group to fight for our children. Numbers bring strength.

What these kids go through to survive the 5 years is horrible and a lot less make it much further than 5 years. Many children do not make it to 5 years. Why would they think a 5 year survival is enough for a child? 5 Years IS NOT ENOUGH!