he displayed in his fight against cancer.  Unfortunately, Lane lost his battle in October of 2012.  When he died, he was only 13, and he had 369,000 supporters on his Facebook page.  Lane was very well liked and displayed that Kentucky “fight hard, and never give up” spirit.  Like his fellow Kentuckians, Abraham Lincoln, Jefferson Davis, and Kit Carson, he never gave up without a good fight.

It is only fitting that his spirit continues to touch the lives of people today.  This time he touched the life of a man in a very small town in Lane’s home state of Kentucky and a woman in St. Louis, Missouri.  They came together to make an impact on childhood cancer.  How much of an impact can two individuals who are separated by such a long distance make on cancer?

Before we answer that, let’s talk about what our childhood cancer community needs most.  Certainly, cures and better funding for research would top the list.  The problem we face today is we will never get there until we involve people outside of our community to help us. One way of doing that, of course, is by spreading awareness.  Spreading awareness really means getting outside of our Facebook community and reaching people who don’t have any idea of what our children face or need.  Now, I think all of us will agree, that certainly is no easy task!  Lane Goodwin reached outside the community and he continues today, four months after his death.

Meet Earl Sebastian and his friend Robin Moore. Earl lives in Berry, Kentucky and Robin lives in St. Louis, Missouri.  Earl is single and has no children, while Robin has a 23 year-old daughter who is a childhood cancer survivor.  Robin, ever since she had known Earl, had been an advocate for childhood cancer because of her daughter Kymberlie’s battle as a teen. Earl and Robin followed Lane Goodwin’s struggle with cancer by following his Facebook page.  Both of them were growing more and more angry everyday at what kids have to endure when faced with the terrible cancer monster.  A few months after Lane’s death, Robin decided she wanted to help by collecting money for childhood cancer research.   She felt that God wanted her to do something.  She started a Facebook page.  She heard of people doing things on Facebook to raise money.  Earl and Robin’s daughter agreed to help her.  They worked every night, and before long they had over 1,300 people “liking” their page.  While that was very encouraging, Earl and Robin, like many of us, realized that you cannot fund cancer research with “likes” alone.   It takes money and they saw 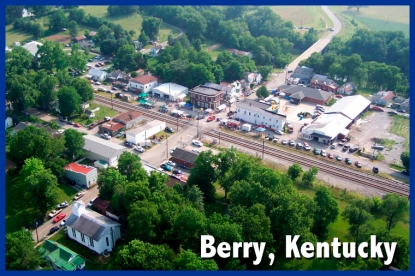 they were making little progress.

The 2000 census states there were 310 people, 101 households, and 82 families residing in Berry then, and not a lot has changed since.  How much money can you get out of 82 families, and what impact would that have?  I think we all know the answer to that: not much!  Earl came to the same conclusion.

On February 16, 2013, Earl and Robin decided to reach out to America.  They created a petition to increase funding for Childhood Cancer Research.  The petition was launched from Berry, Kentucky.  Earl and Robin did not realize that it had been tried before.  In fact, it’s only been done a few times and that was by people who had a more “direct” and tragic connection with childhood cancer.  Unfortunately, each time, the petitions failed for lack of support.  This time, maybe this time will be different!

Recently, the childhood cancer community came together to sign a petition to light up the White House in gold in September.  It only required 25,000 signatures. While it will be great to see the awareness created by having the President light up his house in gold, it will not be any more important than sending a stronger message that we need much more funding for childhood cancer research.

Robin is from Missouri, the “Show Me” state.”  She says, “Go ahead and show me you really care. Sign the petition!”  Earl is cut from the same cloth as Lane Goodwin.  He doesn’t know that he can’t do this.  He doesn’t care how hard is going to be to get the word out.  He is not going to give up, not even one inch!  He is going to do everything in his power to get this petition signed for the kids of the future, not just in Kentucky, but for kids all over the world.  He is going to put Berry on the map.

Soon, Berry will be known as the little town that got the big funding petition for childhood cancer sent to President Obama with all 100,000 signatures on it, and, at the top of the list will be Earl’s initials (ES)  right below God’s signature.  Actually they tied for first, but Earl took second.

Let’s help Earl and Robin get this petition signed!  Expired

This was the third time for Earl to start a petition to get more funding. .  Earl is still determined to get the petition to be a reality.  He says he will keep it up until it passes.  You have to admire his attitude and his desire to increase funding for Childhood cancer.   Too bad we can’t get enough people willing to sign this petition to get it passed.